I have decided (for good or ill) to do that challenging and much 'judged' thing, the 'Top however-many list'.
At first, I thought 'I don't want to bore them all with a top 100, but just 50 would be too hard, so therefore, expect my top 71 in the coming days...'.

That was the plan.

I found it impossible! Even limiting the list to 101 is proving excruciatingly difficult, but I need to draw the line somewhere!

Dunno really.
Posted by gregglesclarke at 18:14 No comments:

Email ThisBlogThis!Share to TwitterShare to FacebookShare to Pinterest
Labels: Updates

The Tree of Life Review 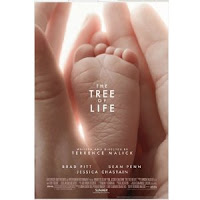 Someone get me a wet wipe, Terrence Malick has just jizzed all over my face.
This was how I felt then-back in July 2011.
'As I left the cinema feeling like I'd just been brain raped,  I was in awe of three people. The two people who left during the film because they are far smarter than me, and my friend Tom, who managed to find a good film in amongst this sodden, cummy tissue of a movie...'

I've been encouraged to write my review of this film for a while. Ever the endorser of fairness, I have decided to re-watch it some 10 months later in order to give it a fresh crack of the whip. So, do I feel different about it this time around?
Critics have described TTOL as 'experimental' and 'poetic.' I agree. There are few films that look as lovely as this one does. It is part poetry, part experiment, essentially, 'art.'
With that in mind, I wouldn't have had a problem with the director placing this work in some sort of exhibition, at a gallery. Some place where such pretension is celebrated, nay encouraged. I may even have gone to view it, and possibly enjoyed some of the undeniably beautiful visuals contained within. But he has placed his largely tiresome drivel in cinemas. And for that reason he is guilty of-at the very least-wasting my time.

What you get with TTOL in a nutshell is endless datedly cheesy voice snippets which surely have been lifted from some pretentious 90's perfume commercial, sporadically placed over some mostly nice images pertaining to life, growth, creation , etc. So you get that, and you also get Brad Pitt, Jessica Chastain and their on screen kids growing up in montages set to classical music. In addition you get Sean Penn (as the grown up version of one of the children) doing serious acting but clearly with no clue why. But what makes it genius, obviously, is the fact that the Director has taken all these elements, thrown them in the air and let them land wherever the wind takes them. Non linear to the point of 'I have stopped caring the fourth time you showed a random shimmering light in the middle of something that could've been watchable' No, critics, this isn't new, and it probably isn't a work of genius.
I take this film as an insult. That Terrence Malick made this horrible self-indulgent mess, put it out there and expected to get away with it is personally offensive to me, and I'm sure lots of other discerning, ticket paying, knowledgeable filmgoers. What's even worse is that he has. More than just got away with it, his film is SO bad, it has numerous respected, veteran critics insisting it must be a masterpiece. A quick look at the films' critical reception will show you that 15 top critics placed TTOL as their Number 1 top movie of the year, with a total of 70 publishing it somewhere in their Top 10. It's as though not one of them had the guts to stand up and say, 'Now, look here, is it not a bit...shit?'

It is a bit shit, yes, brave nonexistent critic.

I am judging it as a film, which is how it is presented. As a film, it is terrible. I would rate it higher than Michael Bays' 'Transformers 2' purely for how beautiful it looks much of the time, but below, say, something starring Hugh Grant and Sandra Bullock. Those films may well be pig-swill, but they are honest pig-swill. They waste my time on a far more palatable level because they don't pretend to be anything other than they are. If TTOL had shown itself in its truest form-much like the great and powerful oz, simply a man cowering behind a curtain, reliant on smoke and mirrors-it would doubtless have simply shown the director dropping his pants and masturbating for 139 minutes. Self indulgence.

The sad thing is, I think there was the chance of a really good film in there somewhere. Scenes of Brad Pitts' determined, stubborn father teaching his sons his own skewered, world embittered version of how to be men are beautifully played by all concerned. There are some great moments showing the boys at different stages of growing up; playing, fighting, learning, experiencing; all of which feel very close to home to anyone who has grown up with siblings of a similar age. The complex relationship and ensuing distance between the parents is also clear and acutely handled.

Ending with these positive points is probably for the best. My rating for this film is only as high as it is because of its beauty, and the sections described above. It is as low as it is due to...everything else.

It's mostly crap. Watch it if you are just wanting something generally pleasant to look at for a while. Any lovers of the type of art where rich people stand around discussing the meaning of a mauve spatula will love it.
Posted by gregglesclarke at 20:04 No comments: 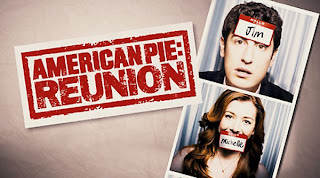 
Spending time with old friends can be a hoot. It can also be slightly awkward. Even at times a tad forced, perhaps?

I have to admit, I have had a mild addiction to this brand of cinematic baked goods since 1999s first slice fell onto my plate. It was outrageous, yes. Juvenile, certainly. Hilarious, absolutely.
The ensuing years have seen the franchises' comedy get even broader, the set pieces fighting to out-gross out the last, and many characters gradually diminished- in some cases simply dropped altogether.

With American Reunion it's therefore extremely pleasing to see ALL the original faces back, from Oz and Heather, to Vicky and Nadia, via Jessica and 'The Shermanator'.

Of course, the focus is mostly (and correctly) pulled towards the 'regulars', with Jim (Jason Biggs) and Michelle (Alyson Hannigan) now married with a young son, Kevin and Stifler in grown-up jobs and Finch... doing his own thing.

At times this latest offering seems to roll back the years, with some typically 'Pie' sequences. There is the traditional pre-credits 'Jim caught in an embarrassing penis-related moment' scene, this time oh so subtly hinting at the difficulties parents face in finding 'alone time'. It is a suitably cringeworthy and racy opening, but perhaps lacking the 'OH MY GOD'/ 'GASP!' factor of its early counterparts. The stand out sequence of the film features (unsurprisingly) Seann William Scotts'-hilarious as ever- Stifler, in surely the funniest revenge scene involving beer, jet-skis and diarrhoea ever committed to celluloid.

There are, as usual, some wonderful two-handed scenes between Biggs and his on screen Dad (the always funny Eugene Levy), the chemistry and comic timing between the two by now at a flawless level, and their few moments together- both funny and touching- are a treat.

It's fair to say that alot of the feel-good factor you get from this film is down to the characters. We know and love them, and as the final act progresses, the 'EVEN I'M IN IT' arrivals keep on coming thick and fast. Speaking as a genuine fan of the series, I found it strangely euphoric to see wave after wave of the original 'Pie' gang appear.

This, to be perfectly honest, is American Reunions' main saving grace.

Overall the laughs are not as often or as sustained as they really should be, and some moments fall slightly flat, but don't be alarmed, it's certainly funny enough to warrant its sudden arrival, and the sheer joy of seeing these characters together again, going full on balls out (stand up, Jason Biggs), is infectious.


Fans of the first three films will eat up this offering, although the 'heart' of the original film isn't quite captured, and newcomers to the franchise may be left wondering what all the fuss was about. I liked it. I know best. So there.

Posted by gregglesclarke at 19:57 No comments: