# All the films listed and mentioned are films I have watched. I have no interest in listing films unseen even if they are universally recognized as the best thing since sliced bread. #

Another great year for film, with a whole host of brilliant offerings, amongst which were some corkers including almost on this list titles such as FRANCIS HA, THE BLING RING, THE EAST, WRECK IT RALPH, and CLOUD ATLAS, as well as other brilliant efforts like THE WAY WAY BACK, GANGSTER SQUAD, THOR 2,  STOKER, THE BUTLER, and PRISONERS.

This years' less than festive 'turkeys' include A GOOD DAY TO DIE HARD, AFTER EARTH, ESCAPE PLAN, GROWN UPS 2, MOVIE 43.

5 THE PLACE BEYOND THE PINES 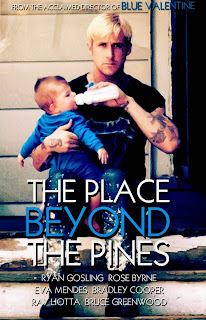 4 ONLY GOD FORGIVES (READ OUR REVIEW) Divided critics and audiences like no other film this year, but Winding Refn follows the smash hit 'Drive' with a very different affair. If Drive enthralled to the point where you couldn't take your eyes off it, this film drifts surreally along in a visually neon-dulled dream-like state. Some found it a bit labouring, but I say go with it completely and don't expect your standard safe pace and structure, and you may just love it. 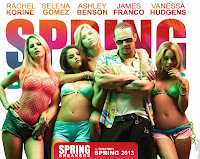 James Franco as a gold toothed, white rasta wannabe crime lord who plays a grand piano by a pool while sexy bikini and ski mask wearing babes with sawn off shotguns dance subtly along. What's not to like?

An American director? Doing a Formula 1 movie?!? Get outa town...

EXCEPT of course, when it's Ron Howard. Here, he delivers a thriller of a movie about Formula 1 in its romantic, dangerous, explosive heyday. The true story of British racing legend James Hunt (an excellent Chris Hemsworth), and his relationships on and off the track-most notably focussing on rival driver Niki Lauda. A great piece about rivalry and friendship, it works so well because it actually spends almost as much time on Lauda (Daniel Bruhl) as it does on Hunt, allowing us to build our own, more informed opinions on each, so we are almost not sure who we are rooting for as things come right down to the wire. Enough twists, turns, and drama to rival...well, Formula 1 in its heyday. 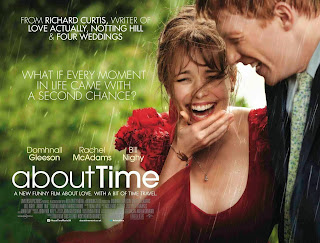 An unexpected gem in most peoples eyes, this one. I was hopeful beforehand, being a dyed in the wool fan of Richard Curtis, and was blown away by this latest- and possibly final- effort.

You know with Curtis that you are gonna get the usual quirky British supporting characters engaging in awkward exchanges,quite possibly an Englishman falling for a beautiful American girl, a slathering of sentimentality, and a soundtrack that makes you instantly leap to your laptop to download it. Legally, of course.

All of these elements were intact here, and are as welcome and warming as ever. Time travelling Domhnall Gleeson shacks up with the ever adorable Rachel McAdams, and much sweet hilarity ensues. Hilarity may be the wrong word here, though, as this is a sweeter, more reflective affair- softer even than the Curtis penned Notting Hill. It is funny though, and sequences like the opening night of flatmate Harrys' new play will  surely convert even the coldest Curtis cusser. Bill Nighy once again steels the film as our heros' Dad. And it is the scenes between the two that stand out here, they being touching, funny, deftly written by a man on top of his game. The real love story, you could say, is the relationship between father and son.

Any film that leaves you with the feeling-and it is undoubtedly the direct message intended by Richard Curtis- that you should live each moment of the day, including the rubbish bits, with your eyes open enough to still stop and see the beauty of it? Good enough for me. Life is short. Worth a go.

I set my co-reviewer the daunting yet enjoyable task of naming his favorite film directors. Ten only. Tough. But credit to him, It's a BLOODY good list. In no particular order. Enjoy.

Making a film a year since 1977 (and a few before that) in a variety of styles, Woody Allen has made a career out of effortlessly mixing comedy and drama. Moved from slapstick comedy to witty comedy, to drama with funny bits to straight out drama and back to comedy again.

Check out: The beautiful black and white of Manhattan or Annie Hall, the best relationship film ever?

Flamboyant Spanish director who graduated from the screwball sex comedies of his youth into gripping Hitchcockian dramas, known for his glossy visuals, high-concept storylines and for not being above the odd fart joke.

Check out: The superb melodrama of All About My Mother or the melancholic ode to communication Talk To Her.

With a mere six films under his belt P.T. Anderson has already established himself as one of the best filmmakers working today. He’s a terrific storyteller who makes films that are both technically brilliant and emotionally charged, whilst always drawing brilliant performances from his actors. Somewhat depressingly he made both Boogie Nights and Magnolia before he was 30.

Check out: Magnolia, still by far the best of those multi-character films and the sheer intensity and power of There Will Be Blood.

The ‘Master of Suspense’ indeed. Maker of some of the most nail-biting thrillers ever, Hitchcock’s motto was “Make the audience suffer as much as possible.”, and few directors have his mastery of tension, although he doesn’t get enough credit for the dark wit in his films. Watch Rear Window again, it’s practically a comedy.

Check out: So many to choose from, but Psycho and Vertigo show the master at his most manipulative.

A masterful visual and audio stylist with a dark streak of humour, Kubrick’s films are always technically stunning slow moving masterpieces that demand full attention. Few directors use music better (with the possible exception of the man directly below.)

Check out: The sheer atmosphere of 2001 or the brilliantly staged and unsettling The Shining.

Italian genius who literally started from the bottom up (he was an assistant director on Ben-Hur) before reinventing the Western in style. Best known for using beautifully composed extreme widescreen shots and for often incorporating natural sound on the soundtrack.

Master of surrealism whose unique visions of twisted Americana have inspired endless “what does it all mean?” debates, often leaving the audience to work out the details. Has made some of the scariest sequences in non horror films, and also some of the most strangely beautiful.

Check out: Mulholland Drive, Lynch’s surrealism at its best or for something completely different try the poetic The Straight Story


Where to start? Hugely influential filmmaker with a wide variety of brilliant output. Whether he’s making one of his cherished gangster epics, or a musical, or a sports movie, or a period drama, or a kids film, you can count on a combination of cool visuals, strong performances and a terrific soundtrack. And half a century after he started he’s still going strong.

Check out: Taxi Driver and GoodFellas between them contain a number of cinema’s most iconic moments.

Because his films literally defined the childhood of a generation. Made several of the best blockbusters in film history – recognising that you need a heart to go with the thrills – and then moved into more serious stuff. Can be guilty of the odd lapse into over-sentimentality but there has never been such a skilled executer of set pieces.

Check out: Personal faves are E.T. and Raiders of the Lost Ark but let’s be honest you’ve probably already seen the lot.

Asian cinema’s Mr. Cool. Wong’s films are undoubtedly made from the same ingredients – loneliness and romance against a neon background with retro pop on the soundtrack with the odd natural background thrown in – but every time he comes up with a beautifully atmospheric film that seems to be both melancholic and uplifting at the same time.

Check out: Chungking Express – a film so cool Quentin Tarantino paid for it to be released in the West – and Happy Together, the best end-of-a-relationship film ever made.
Posted by gregglesclarke at 16:48 No comments: