In a move best described as 'an in-joke' with friends, I have decided to add a marks out of five system ro all my reviews. Instead of boring old stars, I shall be rating all current and future films with up to five (and no less than one) Fassbenders. I hope you will all enjoy this new addition.
Posted by gregglesclarke at 18:58 1 comment:

Email ThisBlogThis!Share to TwitterShare to FacebookShare to Pinterest
Labels: Updates 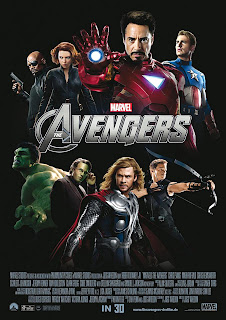 The line up is impressive.

So where does one start when faced with the task of assembling these heavyweights into one kick-ass movie, without losing something -or someone- along the way?

Wisely, writer/director Joss Whedon let's the characters do most of the work, and these are well established (with a couple of exceptions), well loved characters already.

Predictably, Robert Downey Jr's Tony Stark does indeed get most of the best lines, but when you look at the line up, it's hard to imagine which of the others could deliver them as well. Wittier than ever, and here with so many potential targets for his unique brand of mockery, it's Stark who for much of the movie comes across as the Godfather of the largely Lycra-laden luminaries. Strutting like a peacock in the face of would-be pretenders to his throne, there are brilliantly funny and thrilling face-offs with the likes of Captain America, (classily played by Chris Evans) and Thor (a mostly posing, but perfectly pitched Chris Hemsworth).

As for Johanssons bum and Jeremy Renners 'Hawkeye', we see enough of them both to warrant their inclusion with the rest of the double hard bastard brigade. Johansson in particular is given some of the best moments in the film, not least her introduction, a witty 'reverse interrogation' scene, itself the pre-cursor to a great one-on-one with Hiddleston later on. Also this time round we see Black Widow flexing more of her 'action' muscles, and doing so very impressively. In eye-wateringly tight attire. Moving on.

The villain of the piece is Loki, sometime brother of Thor, and all round bully. If I'm honest, i thought the character was just slightly too weedy and pathetic in Kenneth Branaghs 'Thor', lacking any real menace. This time however, it's a showstopping turn from Tom Hiddleston- a stylish performance filled with unnerving moments of terror and pent up emotion, at times a subtle turn, but one that manages to feel almost Shakespearean in size. There is terrific support in the form of familiar faces Samuel L. Jackson and Clark Gregg (no relation) as Nick Fury and Agent Coulsen, and newcomer to the series Cobie Smulders also impresses, in a role likely to be reprised in future outings. 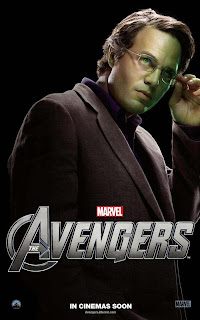 Saving the best til last, smashing in and stealing the whole darn film is Mark Ruffalo as Dr Bruce Banner, a quiet man with anger issues. By rights, Brando-alike Ruffalo should be garnering all the praises for his quiet, restrained, yet always compelling take on a character not yet nailed (until now) in feature film. And what of 'the other guy'..? As opposed to previous efforts, this Hulk is brilliantly rendered by a winning combination of  technical wizardry, great writing and action sequences so cool they could be bottled up and sold as Fonzie-ade.

It isn't just the big guy who has all the fun though, the action sequences and effects are set at WOW across the board. The all action finale is so engaging, its 30 odd minutes fly by in a frenzy of jaw dropping destruction that is so well handled, you may feel yourself punching, kicking and stomping along in your seat.

Quite possibly the best comic book superhero type film yet. Very different to the darker stuff out there, but packing just as big a punch. Everything you hoped it would be. See it. See it now, fool!

Posted by gregglesclarke at 20:11 No comments:

When I think of Scot born and bred film maker Kevin MacDonald, helmer of such fare as political thriller 'State of Play' and the excellent 'The Last King of Scotland', I -like most people- think about reggae.

Knowing his name only from the aforementioned hits, I was dubious to discover his name credited as 'Director' for the new film about the life of a true music and cultural icon, the unchallenged king of reggae, Bob Marley.

Upon closer inspection, it seems MacDonald is in fact a perfect choice after all. As at ease with documentary as he is with feature films (Marley is his eighth documentary to date, with one on chess genius and all-round oddball Bobby Fischer to follow next year), the film is quite an achievement. And it has to be said, MacDonald has pulled out all the stops. Pretty much every name you can think of-and plenty you wouldn't- is up there on the screen waxing openly about their own personal experiences and relationships with Marley, from close family and childhood friends, through to musical peers, random German nurses, and distant relatives from his estranged Fathers' side.

Indeed, one of the standout moments sees a relative listening on an ipod to a track Marley wrote immediately after being turned away from the family he'd flown thousands of miles to introduce himself to. Visibly moved by the lyrics 'stone that the builder refused....will always be the head cornerstone...', he listens on as MacDonald takes almost perverse pleasure in his 'How does listening to that make you feel?' interrogation.

It's of real interest to meet old friends and to see the extremely humble conditions in which Marley grew up. Having loved the song 'No Woman, No Cry' for years, it's enthralling to see the 'government yard in Trenchtown' for real. In fact, you get the sense that the director may have spent a long time with some of the local people featured in this movie, and it is a testament to him how free, frank and open the 'interviews' feel.

Music fans will feel suitably sated too. Almost all the hits you want to hear are in this film, and some are given fresh insight as you learn more about the context in which they were written. 'Redemption Song', already a deeply powerful song, gains greater gravitas given Marleys' health and state of mind at the time.
There are some live performance 'gems' also, from footage of Marley and The Wailers on tour, to the historic moment at the 'One Love Peace Concert', which saw the bringing together, by Marley, of two fierce political rivals, onstage.

If this film inspires you to go back and listen to your Bob Marley collection, as it surely will, maybe you will be struck by both the simplicity of the lyrics, and the scope of the 'message' within. Love, peace, all that jazz.
It isn't particularly new or original, but is there something bigger or better to strive for?

Marley didn't think so, and I'm sort of inclined to agree.

Never straying into the realms of hero worship or over sentimentality, 'Marley' is 2+ hours of pure enjoyment for fans, a very cool blend of larger than life characters, enlightening anecdotes, hard hitting personal revelations, and some of the best music you could wish to hear. It is also not about a dog. Different film altogether.

Posted by gregglesclarke at 21:26 No comments:

A warm welcome to my blog.

YES. I realise there is nothing here. It's currently like the plot of a Michael Bay movie. Really shit.

But fear not. Rest assured that wisdom, humour and opinions of a cinematic nature are on their way. Wisdom, the likes of which Keanu Reeves has never known. Humour like nothing Ray Charles has seen. Words of Skarsgardish, Mortensenic, even Fassbendian proportions. Once seen, said words are likely to change your lives. But don't thank me now, for heavens sake, that can wait.

In the immortal words of  a million teenage boys with a pause button and a copy of 'Basic Instinct',

Watch this space....
Posted by gregglesclarke at 21:29 No comments: