I know everyone is saying it, but it's true. If Hostel had a one night stand with The Wicker Man, this film would be the bastard love child.

First of all, Director Ari Aster has been trying his very hardest to emphatically state that this is definitely NOT The Wicker Man. Well, it sort of is. It more IS than ISN'T, which is more than fine with me, especially when you pour in some ramped up 'Ewwwww, that's just GROSS' into the 'sauce', and stir. He calls it a 'break up' movie. He aint wrong. 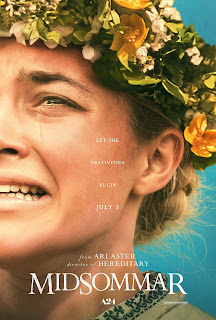 More than a hint of theatre to be found here, the main protagonists all find their roles within the story, well chosen indeed by the savvy casting director who dwells amongst us. It's a bright and sunny, happy clappy folk horror film, yes, but standard horror fans need not panic. It does indeed feature a group of youngsters who may -or may not- be picked off one by one, by an unseen devil. And this group of friends is a harvest ripe for the plucking.

There is a character who, upon a second viewing (if not a first if you're familiar with the genre) most people will be watching very closely. Perhaps, though, it's overthinking things to suggest the real leg work was done off-screen in the months before we the viewer joins the film, as changing circumstances certainly play a role in the events which unfold. Blah, I'll move on.

SPOILER FREE, and before I discuss anything plot related, let's meet the players.

Mark (Will Poulter) is the most tactless, somewhat cocksure and boorish. Asking for trouble? Horror staples suggest he's yer basic 1/10 chance of survival. Josh (William Jackson Harper, in a deft sharp turn from the light fun of NBCs The Good Place) is the studious, knowledgeable one, who on paper surely stands a decent chance of survival from Horror playbook 101. Pelle (Vilhelm Blomgren) is the hippyish, empathetic one, the native Swede whose home village is the setting for the main events of the film. Too nice to make it out alive? Who knows. (I do, but I wouldn't spoil such things for you!)

Our reluctant hero is Dani (Florence Pugh, on devastating form), who experiences a huge family tragedy in the opening scenes of the film, and dives deeper into the dependency of her already imperfect relationship with boyfriend Christian (Jack Reynor). She's clearly the main part, so surely she should expect at least the basic Ellen Ripley/Sidney Prescott 9/10 survival odds. The distracted boyfriend, however, doesn't tend to fare well in horror. Half a chance. At best.

But Ari Aster, in this instance, may not be sticking rigidly to horror conventions, so it's perfectly possible that no-one dies. Or everyone does. I'm saying nothing. Chances of everyone doing some kind of Christopher Lee/ Lord Summerisle hopping dance while skipping around a flowery stick, surely 100%.

I will say that expectations were high after the brilliant Hereditary. Just as the final quarter of that film divided the audience, the last reel of Midsommar may feel a tad like showboating to some. I actually would stand by the ending of Hereditary, it had a sort of Rosemarys Baby extra layer of oddness to it, you could say it jarred slightly, but in a good way. Equally, this builds to a bewildering, disturbing and ballsy climax, and definitely lives up to the hype it has been gathering. One theme that Aster seems bonded to, is that the scariest thing out there is the depth of the susceptible human mind.

You are gonna see some images in Midsommar that will stay with you, and not just the horror. A huge part of the films success depends upon the audience settling in deep into this culture, this village, it's people and practises. One of the biggest triumphs is the production design. Itself immediately focussing the viewer, and giving you the sense of the unfamiliar, an abnormal 'normal', if you like. Certain drawings and carvings and stitchings adorn the place, and are worth trying to get a good glimpse of.

In horror terms, this is alot closer to The Wicker Man or The Witch than it is to say, Saw or Scream (All of which are films I love). If you allow yourself the time, and settle into it, the atmosphere will sweep you up nicely, and don't worry, you'll get as much gore as anything Freddy Krueger and chums can offer up.

I mean, I haven't touched a pie since...


"Dani and Christian are a young American couple with a relationship on the brink of falling apart. But after a family tragedy keeps them together, a grieving Dani invites herself to join Christian and his friends on a trip to a once-in-a-lifetime midsummer festival in a remote Swedish village. What begins as a carefree summer holiday in a land of eternal sunlight takes a sinister turn when the insular villagers invite their guests to partake in festivities that render the pastoral paradise increasingly unnerving and viscerally disturbing."
Posted by gregglesclarke at 06:02